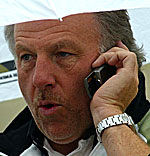 There is mounting speculation that Renault is on the verge of announcing its withdrawal from F1 with David Richards Prodrive taking over the team and its Enstone HQ.

Rising costs, poor results, the recession, falling car sales, 'Crashgate' and the numerous other scandals to have hit the sport in recent times had already put Renault's F1 future in doubt. In recent weeks senior figures within the company have been dropping broad hints that the French outfit might follow the example of Honda, BMW and Toyota.

Following high level talks in Paris in early November, Renault boss Carlos Ghosn said the company would make a decision on its F1 plans before the end of 2009. However, in the eyes of many the decision had already been made, it was simply a matter of how the company went about it.

Concern over Renault's future is understood to have played a significant role when it came to meting out punishment for 'Crashgate', with the company's slap on the wrist seen by many as an attempt to prevent the manufacturer jumping ship. However, Flavio Briatore's ongoing legal action - the result of which won't be known until January - has led to even more embarrassment with the Italian claiming that a deal was struck between the FIA, Bernie Ecclestone and the French manufacturer in order to keep Renault in F1.

Having missed the boat once before with a Mercedes-powered Prodrive team, Richards, who enjoyed a successful spell with Benetton before it was bought by Renault, failed to make the cut yet again during this year's selection process. However, purchasing the Enstone outfit might finally see the Welshman realise his dream of leading his own F1 team.

The engine freeze means that Renault would be able to continue to supply engines to Prodrive, though it is not yet known whether Red Bull will continue with the French manufacturer's power-plants.

The major players in this story are giving little away at present, but it is widely thought that now the deal is effectively out in the open the pace of its conclusion will accelerate.

"We cannot comment on the Renault situation," a Prodrive spokesman told Reuters, "but it is well known that our intention is to get into F1. We proved our credentials earlier this year when we had a strong business case for an entry, but having had an engine deal with Mercedes-Benz in place we were not willing to sacrifice our competitiveness."