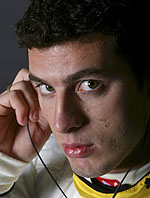 Argentine driver Jose Maria Lopez is understood to have signed a deal to driver for USF1 next season, providing he is able to an $8m sponsorship package.

On his personal website, alongside pictures of him with team owners Ken Anderson and Peter Windsor at the outfit's Charlotte HQ, Lopez, who previously tested with the Renault F1 team, writes: "Up until now we have dealt over the phone. However, given the progress made we went to visit the team personally and talk to Peter Window and Ken Anderson about it. We verbally agreed a deal that will be completed next week.

"It's a new team, facing this project from scratch," he continues, "something different to my experience in Renault, where it was a structure with a lot of experience in F1. However, I have been impressed by the commitment and professionalism with which they are facing this project. We have seen a windtunnel that's nearly real scale, something fundamental to the development of the car which hopefully I will be racing in 2010."

In 2004 he contested F3000 with CMS in addition to the V6 Eurocup and even an outing in the FIA GT Championship with the DAMS Lamborghini team.

In 2005 he raced in GP2 with DAMS, switching to Super Novas for 200. In 2007 he competed in a couple of rounds of the American Le Mans Series before returning to Argentina to take part in TC 2000, the country's touring car championship, which he won in 2008.