Trulli quickest as the sun shines at Suzuka 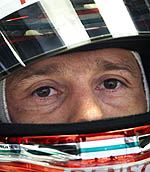 Ahead of today's sole free practice session, the air temperature is 25 degrees, while the track temperature is 26 degrees. Unlike yesterday, it is bright and sunny with barely a cloud in the sky.

The McLarens head the queue at the pitlane and when the lights go green it is Kovalainen who leads a train of 16 cars as the day's action gets underway. Such is the desire to get to work and make up for the time lost yesterday, Button, in his efforts to pass Alguersuari, makes contact with the Toro Rosso breaking the front-right endplate on the Brawn. A silly mistake that could have proved so costly.

While most of the cars head straight back to the pits, Alonso is the first driver to post a time (1:35.438), ahead of Trulli, Fisichella and Timo Glock who is back in action after missing yesterday's sessions due to illness.

Next time around, Trulli goes quickest, but his time of 33.901 is soon beaten by Raikkonen who crosses the line at 33.453.

On his first flying lap Button goes tenth with a 34.977, the eleventh driver to post a time.

The tyre options this weekend are hard (prime) and soft (option). Yesterday we only got to see full wets and intermediates.

Trulli goes quickest, ahead of Raikkonen, Heidfeld and Button as the Englishman posts 33.562.

Eighteen minutes into the session all but Alguersuari and Vettel have posted times, the German, once again, appearing to be limiting his running.

Hamilton crosses the line at 33.562 to go fifth as Barrichello improves to sixth. Vettel, on his first flying lap, goes seventeenth with a 34.576.

From out of nowhere, Buemi produces a 33.203 to go quickest, the Swiss driver subsequently improving with a 32.815. The Toro Rosso driver is on the prime tyre.

Having gone quickest in the final sector, Kubica improves to fourth overall with a 32.899. The Pole, along with Kimi Raikkonen, is said to be on Toyota's shopping list for next year. Talking of which, Raikkonen goes fourth overall having posted the quickest time of the day in sector two.

After a disappointing performance in Singapore, Force India is looking a lot better here, with Sutil posting 32.609 to go third. Moments later Liuzzi improves to ninth with a 33.167.

With just over twenty minutes remaining, the option tyres are beginning to make an appearance. Kovalainen, one of the first on the softer rubber, moves up to sixth with a 32.860. Meanwhile, Button, who is on a long run, is told that drivers on the soft rubber are experiencing graining and general degradation with the prime tyre proving to be more stable.

Buemi, who is still heading the timesheets, consolidates his position with a 31.771 having gone quickest in the first sector. Webber, having gone cross country, returns to the Red Bull garage.

Heidfeld has a spin after getting a wheel on to the grass on the approach to the hairpin. Glock is now down in twentieth, 2.826s off the pace. Elsewhere, Grosjean spins the final chicane, the front brakes appearing to lock up.

As Button continues another long run, Glock improves to ninth (32.760), just when we were beginning to think that maybe he hadn't fully recovered.

Barrichello, on the option, goes third (32.488), as Raikkonen consolidates second with a 32.445. Fisichella remains eighteenth, almost a second off his teammate's pace.

Vettel, who is now on the option tyre, posts 32.414 to go second. Clearly the softer rubber has pace but there remains concern as to its durability.

The yellow flags come out when Webber goes off into the tyre barriers at the Degner Curve, the Australian's session coming to an abrupt end.

With five minutes remaining, Buemi is still quickest with his Toro Rosso teammate Alguersuari in seventh (32.689).

Alonso, currently twentieth 1.757s off the pace, posts personal bests in all three sectors, improving to tenth with a 32.742.

As the clock counts down there are no major improvements and certainly no purple sectors appearing on the timing screen.