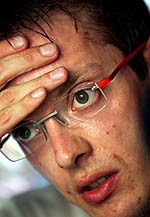 Following a successful half-day's testing at Magny-Cours last week with British outfit Ultimate, Bourdais, Bourdais was soon recording impressive lap times at the wheel of the 750bhp V12-powered Elan chassis, and subsequently took the decision to contest the last three rounds of the 2009 Superleague series.

"Superleague Formula is very happy and very proud to welcome a driver with as many titles as Sébastien Bourdais," said Alex Andreu, President of Superleague Formula. "His decision was made after testing our car at the Magny-Cours circuit, who I would like to thank for believing in our project and participating in its development. Our objective is to attract the best professional drivers to our series. Giorgio Pantano, Antonio Pizzonia and today Sébastien Bourdais are amongst these. We're also hopeful that others will join us shortly. The more drivers we have of their calibre, the more Superleague Formula will carve its rightful place in the modern motorsport landscape, as well as offering a quality show to its fans."

According to series organizers, Bourdais' decision to join Superleague "confirms the category's position as a genuine alternative to Formula 1 for professional drivers".

The former Toro Rosso driver will line up at Estoril this weekend alongside F1 drivers Giorgio Pantano, Antonio Pizzonia and Enrique Bernoldi.