Raikkonen to WRC with FIAT? 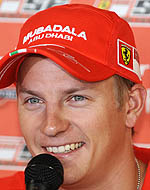 With increasing speculation that Volkswagen and FIAT are to join the World Rally Championship (WRC), one has to wonder if a berth might be found for Kimi Raikkonen.

Following the withdrawal of Suzuki and Subaru at the end of 2008, the WRC was left with just two manufacturer teams this season, Ford and Citroen.

However, looking ahead, Neil Duncanson, chief executive of North One, the British TV production company that owns International Sportsworld Communicators, which in turns holds the commercial rights to WRC, claims that Volkswagen and FIAT are both eyeing the series, fully appreciative that the costs are significantly lower than competing in F1. That and the fact that WRC cars have more significance to the man on the street than F1 cars.

"I've got one or two who I think will come in," says Duncanson, according to Sport Business. "I don't want more than four because any more than that and they can't win."

Referring to the loss of Subaru and Suzuki he admitted that it, "certainly affected the WRC but no more than the overall economic scenario".

While FIAT has yet to comment on the possibility of returning to WRC, such a move might ease the Italian company's dilemma in terms of Kimi Raikkonen who looks set to be dropped at the end of the year in favour of Fernando Alonso.

With another year of his contract to run, it is thought that Ferrari will have to stump up a sizeable compensation package for the Finn. However, a 'sweetener' in the form of a works drive with FIAT's rally team might be the way to keep everyone happy and save a certain amount of face.