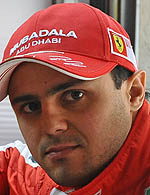 Ferrari has dismissed claims that Felipe Massa could be back in action in time for the Italian GP at Monza on September 13, but doesn't entirely rule out a return this season.

In recent days, there have been claims, mostly on the internet, that the Brazilian is making such good progress that he is preparing to make an emotional return to the cockpit in time for the Maranello outfit's home race. However, according to the Italian team there is currently no fixed date for the driver's return, though it is hoped he might compete in at least one more race this year.

"It would be a fantastic and terrific surprise if Felipe was able to race again before the end of the season," said a Ferrari spokesman, according to the Guardian.

The comment comes just 24-hours after team boss Stefano Domenicali paid a surprise visit to Massa's home in Sao Paulo, the Italian subsequently claiming that "Felipe is in excellent form and his recovery is going very well."

Whether Massa attends, far less races in, the Italian Grand Prix or not, it is widely speculated that Ferrari will use the occasion to announce that two-time World Champion Fernando Alonso is to join the team for 2010 along with the Spanish banking group Santander, which currently sponsors McLaren. With Kimi Raikkonen thought to be heading to WRC, it is understood the Italian team is in the process of agreeing a compensation package in order that they can terminate his contract one year early.