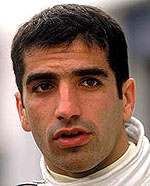 Already concerned that local hero Fernando Alonso might be missing from the Valencia grid, Carlos Gracia, president of the Spanish motorsport federation, has criticised Ferrari's decision to replace Felipe Massa with Luca Badoer.

With Michael Schumacher ruling himself out of the Valencia event, Gracia clearly hoped that Ferrari might opt to give the vacant race seat to its second test driver, Marc Gene (right), fresh from his victory at Le Mans. However, the Maranello outfit has instead chosen to call up Badoer, even though the Italian hasn't raced an F1 car in anger for ten years.

"It is one of the most absurd things that the people in charge of Ferrari have ever decided," Gracia told the Spanish newspaper Marca, "I consider Gene to be better prepared, and would have though that winning the Le Mans 24 Hours in June - the first time that a Spanish driver has shown himself capable of racing for victory in the race - would have been an important factor for Ferrari. Badoer has not driven for three years, and Gene is in much better form than he is."

Three years younger than Badoer, Gene last raced in F1 in 2004 when he (ironically, given Gracia's complaint) replaced Ralf Schumacher following his accident during the United States Grand Prix.

In 36 outings with Minardi and Williams the Spaniard scored 5 points, his best result being a fifth in Italy (2003), when, once again, he replaced Ralf Schumacher, this time following a testing accident.