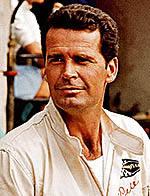 Speaking exclusively to Pitpass, 1966 World Champion Pete Aron has confirmed that he has submitted an entry for the 2010 World Championship.

While unable to give too much away, Aron told Pitpass: "We at Aron Grand Prix believe that the WMSC decisions relating to cost-capping and the provision of revised technical regulations to facilitate the entry of new teams into Formula One should be embraced.

"This is not only prudent considering the backdrop of global economics," he continued, "but also taking into account the need for new teams to be able to compete credibly against long established entrants.

"It is imperative that performance breaks be afforded to new cost-capped entrants who will have a limited period in which to form teams, design and manufacture their cars," he added, his words strangely familiar. "With these breaks Aron Grand Prix looks forward to competing with the existing teams who enjoy decades of experience. The question of speed differentials, safety and the spectacle of Formula One must also be considered.

"Aron Grand Prix is forging ahead with its Formula One project with the objective of securing an entry into the 2010 FIA Formula One World Championship and in the expectation that the decisions of the WMSC will be respected in full."

Aron, a sprightly 81, won his title in controversial circumstances. Having been fired by Jordan-BRM after an accident involving his teammate, Scott Stoddart, an accident which saw the American described as a "coward" and a "bloody liar" by team boss, Jeff Jordan, Aron sought employment as a TV commentator. He was subsequently offered a drive by the Yamura team, which, after two whole seasons of F1 hadn't won a race.

In the second half of the season, Aron enjoyed a historic fight for the title, a thrilling four-way fight with Stoddart, the late Jean-Pierre Sarti and Nino Barlini, a fight which saw the title decided on the last lap of the race of the championship.

While some will be salivating at the thought of Aron Grand Prix making it two American teams on the 2010, there is talk that Yamura and Jordan-BRM are also looking to return to the pinnacle of motor sport along with Connaught, Eurobrun, Forti, Vanwall, Theodore and Maki.

Meanwhile, at Maranello, Agostini Manetta has been seen going through the old storeroom digging out pairs of the Ferrari-Manetta team's legendary brown overalls in anticipation of Ferrari breaking ranks with FOTA.