Force India likely to be suspended from FOTA 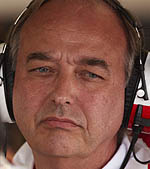 Following earlier reports, FOTA Vice Chairman, John Howett, has confirmed that Force India has submitted an unconditional entry for the 2010 World Championship, and that the Silverstone-based outfit is now likely to be suspended from the teams' alliance.

"It's likely they may be suspended," the Englishman told reporters in Istanbul. "I haven't really had the opportunity to speak to Vijay (Mallya) directly. I think in accordance with FOTA he submitted a conditional entry and apparently due to commercial issues, totally unrelated to any other team or support, they felt obliged - because of other binding legal activity due to funding or other issues - they needed to submit an official entry.

"He will be here tomorrow," Howett continued. "I will speak to him then and I have to say that I think it is the intention of FOTA to suspend them, based on a face-to-face discussion with Vijay but he has confirmed to me, through Bob Fearnley, that he is totally supportive and committed to FOTA."

Last week, following its decision to break ranks with FOTA and lodge its own unconditional entry for 2010, Williams was suspended from FOTA, though both sides were keen to stress that the move is temporary.

Explaining the decision to break ranks, Frank Williams said that with obligations to his partners and employees, submitting his team's entry was "unquestionable".