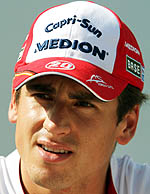 Adrian Sutil put in another brilliant wet weather performance for Force India in China, running as high as sixth - ahead of Lewis Hamilton - before aquaplaning caught him out and pitched him into the tyre wall with less than six laps to go. Adrian had started with a light fuel load, but the team changed strategy in the early laps behind the safety car by bringing him in and giving him more fuel. Once the race finally got going he pitted again on lap 19 and filled up to run to the flag in what was in effect a one-stop strategy. Running a very heavy car and keeping his extreme wet tyres alive for such a long stint was a huge challenge. We asked him for his thoughts on the race.

You had a fantastic race in the wet in Monaco last year, and another one here, but sadly both ended in retirement. What are your feelings about today?
Adrian Sutil: 'Our performance was really very good and we should all be very proud of this race. It was a risk to go on one-stop, because I stopped very early. I was very light at the beginning and then under the safety car we went into the pits and just filled it up. We knew it would have been tight on the tyres, but the grip in the corners was enough to stay in a good position, but with the aquaplaning on the straights it was sometimes hard to keep it on the circuit. You never knew what was going to happen because the car went to the left or the right. With six laps to go I hit another patch of water and ended up in the wall. It was very disappointing.'

That set of tyres had to do a lot of laps. How did they look when you stopped?
AD: 'They were still OK, but the profile goes down and down. We're talking about a few millimetres, but it is still enough to cause a lot of problems with the water. I got a lot of understeer, and the traction went down of course, but after 30 laps that's how it is.'

Was it fun taking on the McLarens in an equal fight?
AD: 'Yes it was good! I made a good pass on Kovalainen when he went out of the pits, so I could take his position. Then I was behind Lewis, and in the end he was behind me. It was nice to just race the guys in the front there. We had really good pace, so that was promising.'

In Monaco you had the reigning World Champion behind you when you retired, and you did this time as well!
AD: 'That's true. Maybe it's a little bit of bad luck then! It's just a little co-incidence, but it's nice to race the World Champions of course, when we don't have the fastest car in the field right now.'

Since Monaco there have been several wet races and potential opportunities, but luck hasn't been on your side. Was it good to finally have another chance to show what you can do?
AD: 'This was very nice, I'm pleased that it happened like this. We could have done a safe run, changed tyres, and maybe we would have been in the back. But that's not the way we want it to go, we had to take a risk because we know that we're good in the wet. Of course we were unlucky and it wasn't possible to bring it home, but sometimes it's just bad luck if you hit a patch of water. We couldn't do anything about it.'

You filled up quite early. How close was it going to be on fuel?
AD: 'We were on the limit, but it was definitely enough, we just checked it. I tried to save a lot of fuel during the race. I knew it was going to be a long way to the end. In the last 10 laps I was attacking again, because we didn't need to save the fuel anymore.'

We're unlikely to have a wet race in Bahrain next week. Any thoughts on going there?
AD: 'I think there we'll have seriously dry conditions! We'll get a few updates on the car which will help us get a better performance in qualifying. But again it's going to be difficult. We're at the back of the field right now, and we have to take our chances, like we did here, and try to move on. Development is going on, and we're getting new upgrades for the next few races, hopefully it's enough to progress.'