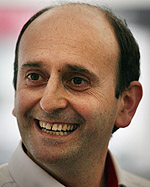 Toyota has announced that Luca Marmorini, the head of its engine development department, has left the company.

"Luca has made a fantastic contribution to Toyota since the beginning of the Formula 1 project," said the team in a statement, "including invaluable work on the RVX-09 engine and Kinetic Energy Recovery System projects, but he has chosen to leave the team.

Marmorini, who has previously worked for Ferrari, joined Toyota Motorsport in 1999 and was promoted to the roll of Technical Director Engine in 2004.