Vettel to test for Red Bull 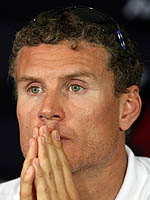 Whether by chance or deliberately, Mark Webber has let the cat of the bag, revealing that Sebastian Vettel is to test for Red Bull at Jerez later this month.

The German heads to the Milton Keynes outfit next season, and according to Webber this is an opportunity for the youngster to familiarise himself with the team.

The announcement comes at a time when there is speculation over David Coulthard's future, with some sections of the media claiming that the Scot will be dropped after Monza. Meanwhile, The Times recently launched an astonishing attacking on Coulthard, describing him as "accident-prone" and claiming following the ill-fated overtaking move in Valencia - you will remember it, it was the only overtaking manoeuvre in Valencia - there were "groans of 'not again' in the press room".

Despite the Scot's popularity, and the fact that he has given the team two of its best ever results - 3rd in Monaco 2006 and again in Canada this year - it should not be forgotten that the veteran has already decided to retire at the end of the season.

Furthermore, it should not be forgotten that Red Bull, as a sponsor, operates what can only be described as a 'pick and mix' policy with regards its drivers. With Sebastian Buemi and Takuma Sato due to test for Toro Rosso at Jerez - not to mention the talk of a Honda engine deal for the Faenza outfit, as first predicted on Pitpass - and Vettel running the Red Bull, anything is possible.

Also, as revealed by Pitpass last week, Christian Horner has been given a stark warning by Red Bull; if the team doesn't finish in the Top 5 he's out of a job. With Coulthard only having scored six points this season - courtesy of that third in Canada - to Webber's eighteen, perhaps the popular Scot really is on the verge of being dropped.