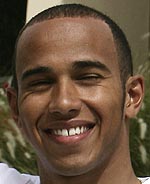 When F1-related websites start 'borrowing' stories from Popbitch and passing them off as info from an informed source, you know things are bad, and that therefore it is best to take much of what you read with a (large) pinch of salt.

The same can be said of a story that was doing the rounds earlier this week claiming that Lewis Hamilton had paid £196,000 (250,000 euros) for the personalised number plate LEW 1S. The story appeared on a number of websites, including that of the official British broadcaster ITV, but was subsequently deleted.

British fans of the driver felt uneasy, mindful of the fact that personalised number-plates are now considered the naffest of the naff, the sort of thing that only footballers and WAGs opt for, not Formula One drivers.

Thankfully, Lewis has rubbished the story, admitting that he had heard nothing about it until today.

Thing is, following his recent publicity stunt for Vodafone, when, playing the part of Apollo, he allowed himself to be lowered on to a stage dressed in his full racing gear, as the battle of Troy - complete with horse - was re-enacted below, some are willing to believe anything of the young millionaire. Even naff number-plates.