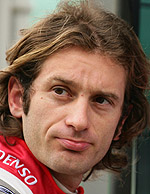 You must have been hoping for better than 13th place at Monaco?
Jarno Trulli: Of course we were expecting more. It was a disappointing result and a difficult race because things just didn't go well for us. It was looking okay early in the race when I was fighting for the top six but after my first pit stop the race started to drift away from us. It's a shame because I enjoy driving at Monaco and I have usually gone really well there, but this one didn't exactly go according to plan.

Can you explain how the changing conditions affected you?
JT: We started the race on standard wet tyres but the rain kept falling and this made the track very difficult to drive as there was no grip, so we made the decision to switch to extreme wets. That went really well at first because I was quick and I did some good overtaking manoeuvres, even though I was still losing time in traffic. But then the rain stopped and it was hard work on those tyres as the circuit was more suited to standard wets. When it came to my scheduled stop for fuel we went back to the standard wets but at that stage I had lost a lot of time and, even if you are quick, it is impossible to overtake in Monaco. The track continued to dry and eventually the dry option tyres were possible; with those I was able to set some quite fast lap times at the end but it was too late.

Looking back to earlier in the week, what happened to you in free practice?
JT: On Thursday morning I made a mistake and hit the wall on the exit of Portiers. It was a light touch but enough to break the suspension. In the second session I had a mechanical problem so had to stop and change part of the floor, which was damaged by the kerbs. We lost some track time repairing the car. In general I didn't feel completely confident with the car on Friday and even on Saturday morning I was struggling a bit; generally I was missing bite and grip.

Did that also affect your qualifying session?
JT: Obviously I eventually went through into Q3, did my best and ended up eighth on the grid but I couldn't drive the way I like to at Monaco. The mix of problems I had were all related to grip and I didn't have the feel I wanted from the car. I was still able to compete but I wasn't 100% happy or able to push as hard as I wanted to, and in Monaco if you are missing a bit of confidence you lose a couple of tenths.

Were you happy to get into Q3 and take eighth?
JT: I must say I was pleased to get through. I pushed myself, even though I didn't have the confidence I wanted in the car, and I did it. I was happy with my lap and satisfied with the result. I think I performed well and eighth was a good place to start from. We should have been able to score points, especially as I had a competitive strategy but unfortunately the weather caused problems for us on Sunday.

What are your thoughts looking ahead to Canada?
JT: Montreal is a good place to go and there is always a good vibe. Monaco is a one-off race and the Montreal circuit has a very different layout. You need much less downforce in Canada and the brakes are very important there. We tried to do some Canada work at the recent Paul Ricard test but unfortunately the last day was rained out. The team obviously has data from previous races there so we will be all right, but it would have been better if we had been able to run a full day of preparation.

Are you concerned about what happened in Monaco?
JT: Not really because Monaco is unique and the situation on Sunday afternoon was quite unusual, so I don't think we will have the same issues in Canada. Even in the rain early in the race we were in a pretty good position so we should not be downhearted and I will go to Canada with optimism as usual.