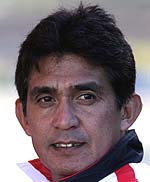 Talks in Tokyo over the future of the Super Aguri team are continuing, though it appears likely that it may be several more days before a decision is known.

Following the collapse of the deal which would have seen the Magma Group take control of the (financially) struggling outfit, there has been serious concern as to whether the team will be able to complete the season, or indeed the next race.

While the team took part in the Spanish GP, it is believed that this was largely due to support from Bernie Ecclestone, with Honda having made it clear that it is no longer willing to invest in the outfit originally set up in order to give Takuma Sato a berth and widely seen as the Japanese manufacturer's 'sister' team.

The talks have now stalled for a couple of days as some members of the Honda board are unavailable due to the national Golden Week holidays.

However, while attention is focussed on events in Japan, back in Europe the saga has taken a new twist. According to Reuters, a source claims that following last weekend's Spanish GP, the Super Aguri cars have been returned to Brackley, the Honda F1 Team's base, rather than being sent on to Istanbul for the next round of the World Championship.

The cars were supposed to be taken to Trieste from where they would be sent by ferry to Istanbul, a three day journey. Reuters claims that while the team's transporters have been seen in Trieste, the cars are in Brackley.

With this in mind, it's worth noting that a reliable source has told Pitpass that the money from Honda GP is secured on the Super Aguri factory, its cars and other assets. Consequently, if Super Aguri can't pay the money back, Honda GP gets the team.

Difficult times for a popular team.