We have done nothing wrong, says Briatore 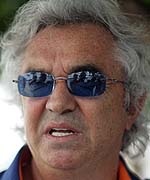 As a new spy saga threatens F1, causing Bernie Ecclestone to call a 'crisis meeting', Renault boss Flavio Briatore has said that his team has done nothing wrong.

Speaking to The Times, the Italian admits that McLaren data in the possession of Phil Mackereth was shown to members of the French team, but that it was never used.

"When we found out in September," says Briatore. "We talked with this guy (Mackereth), and we started an investigation and immediately suspended the guy and then immediately we informed McLaren and the FIA.

"We gave to Mr Mosley all the correspondence and the evidence and a statement from our engineers making clear we never used any McLaren system in our car.

"The information was in the computer," he continued, "it was in the disks that this guy brought. "It was very simple. It was a drawing of a few systems, it was part of a drawing of the gearbox and was part of a drawing of a mass-damper. I am confident the information was not used and not only me. We have witness statements from every engineer that was involved and, categorically, everybody says that there was no influence of any of these things on the design of our car."

The French team has already revealed that it invited independent experts Kroll, who were appointed by McLaren, to visit its Enstone factory to discover what had happened to the data. However, it claims that the officials made a cursory visit and took possession of the relevant disks.

"We were happy to let them inspect our computer," says Briatore, "we wanted to give McLaren the opportunity to check that there was no influence on the design of our car, but they never took up the offer.

This conflicts with reports elsewhere, which claim that Kroll examined the hard drives of the Renault system and that the dossier sent to the FIA by McLaren includes at least 15 statements from Renault engineers admitting that they had discussed the material supplied by Mackereth."

Briatore, who says that Mackereth will be dismissed, remains confident that his team will not be punished at next month's hearing, even though there are many within Planet Paddock, and indeed on fan message boards and forums, who think otherwise, feeling that this latest saga is possibly even more 'open and shut' than that which dominated the sport for much of the summer.