Ferrari in court in London this week 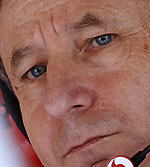 In a press conference following the British Grand Prix, Ferrari team boss Jean Todt revealed that there will be a court hearing in London on Tuesday (July 10) as the next phase of the Stepney Saga gets underway.

Naturally, due to the legal situation, Todt was unable to say much about the situation, however, when asked if he was aware of Stepney own comments to the media, the Frenchman replied: "I have been reading some of the magazines which have been writing about that. Unfortunately at the moment I am not allowed to make any kind of comment.

"I wish I could answer and give more detail now, but as it's a court case, I'm simply not allowed," he continued. "If you analyse the different statements, official statements, which have been made by some people involved in it, you can clearly make your own judgement from what has been officially stated and then came out with some interviews."

It was then that he revealed this Tuesday's "public hearing"

"I'm simply not allowed to speak about it because it's a court case," he continued. "Things will come over the next days, over the next week and then when everything is settled, then probably it will be easier for us to comment and to answer to details, but at the moment, unfortunately, I'm not in a position… I cannot, simply, I cannot because it's a court case, one in Italy and one in UK."

Asked about the procedure, and whether individuals will be named, Todt said: "The first procedure was our lawyers together with some independent experts to go to visit the house of one of the top management people from a competitor's team. They decided after that, that they have some facts, which allowed them to move forward. And to move forward is to go to the High Court on Tuesday." He said that he was unable to comment on the names of the individuals who might be named.

One thing that has puzzled many is why it took so long for Honda's Nick Fry to come forward and admit that he had held a meeting with Stepney and (McLaren chief designer) Mike Coughlan. The meeting took place on June 1, yet it wasn't until the afternoon of Thursday 5 July, after McLaren had become embroiled in the affair, that he reported the meeting to McLaren CEO Martin Whitmarsh. It was another day before he spoke to Ron Dennis and Todt.

"I don't have everything in hand to comment about that," said Todt. "We had a team principals' meeting on Friday, which finished about 1pm. Nick Fry came and informed me for the first time about this meeting. That was the only time I spoke with him about that."

In reference to Stepney's comment (threat?) that he 'knows where the bodies are buried', Todt said: "It makes me smile, and it is good sometimes. But after 10 years, or the last 14 years, it is true it is like being in the family. There are so many things that do happen. But we have had over 14 years with the team, some good times and some tough times, but nothing that cannot come out. So you know very well in this business that if something has to come out it does not wait 10 years. We have about 900 people employed in the company, so the answer is quite easy."