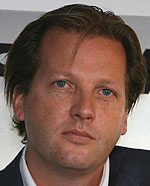 Victor Muller has stepped down as Spyker's CEO and Formula One Director, to concentrate on design and brand development, leaving Michiel Mol (right) to fill the role, albeit on an interim basis.

"It has been a privilege to lead the (re)creation of Spyker since Maarten de Brujin and I founded the company in 2000," said Muller in a statement issued by the Dutch company. "No one could have anticipated then the exceptional growth that would materialize in the years to come.

"With the acquisition of the Formula One team in September 2006, I also gained a business partner experienced in successfully building up large companies. At that point, Michiel and I started discussions on the possibilities for my succession. After more than seven years of very hard work I felt it was time for me to lift throttle a bit."

"Whilst Victor's decision to stand down from the role of CEO has come sooner than expected, the team that he built remains," said Mol. "I see my key role going forward as continuing to strengthen and expand that team with the most capable motor industry talent available. In time, one of those recruitments will need to be for the role of CEO as I return my focus and energy to the building of the Spyker Formula One team. Until that point I am highly committed to take on the responsibilities of leading the company."