Massa reflects on a perfect weekend... and the threat from Hamilton 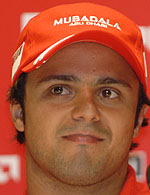 In his personal blog for Ferrari, Felipe Massa makes a number of interesting observations, such as learning from his mistake in the first corner at Sepang, the need to maintain a strong qualifying performance, the minimal advantage his team has over McLaren and Lewis Hamilton, Naturally, it is the last point that the media will pick up on, so why should Pitpass be any different?

Referring to the English youngster, who leads the World Championship, Massa writes: "I have spoken quite a bit to him: he is definitely strong and is not bothered by pressure.

"At the moment, you cannot say that Fernando or him are the better driver," he continues, "but if the situation continues like this, then maybe Lewis can even be more dangerous than Fernando, given his championship position and how he goes in the car.

"At the moment he seems more comfortable in the car than Fernando. We need to keep an eye on that, because he can be a dangerous threat."

He then comments on last weekend's perfect weekend in Spain, which netted pole position, fastest lap and the win.

"I think Barcelona was another perfect weekend for me in every way; the way we approached the job, the way practice went and also qualifying. In fact qualifying on pole was a very important preparation for the race, because even with the new chicane, it was still not that easy to overtake. So it was very good for me to start from the front.

"Sure, it turned out to be a tight battle at the first corner, as everyone could see," he continued, referring to the first corner incident that Alonso views altogether differently. "What happened there showed that I am not scared of being aggressive and that I can be a fighter. I know I am up against some very tough opposition, so this proved that I can be tough too. And then, the way I drove after the start shows that after what happened in a similar situation in Malaysia, I am able to learn a little bit and move forward.

"I think it was meant to be my day," he continues, "because even with the fire on my car as I drove out after the first pit stop, nothing was going to stop me! Actually, at the time, I never saw the fire, as I was looking straight ahead. That was a good thing for me and the first I knew about it was when the journalists asked me in the press conference after the race. It was one of those things where it is definitely better to know about it after it has happened!

"Therefore, in my mind, this was quite a straightforward race with no problems or mistakes from the start to the finish. I managed to get the car working well on both types of tyre, including the softer one, which was very important in terms of being able to build a gap over the guys behind. After that it was just a matter of managing the car and the situation. I would never say it was an easy race, but it was quite controlled, once the excitement of the start was over.

Looking ahead, the Brazilian adds: "What is unusual is that after three poles and two wins in a row, I am still only third in the championship. It shows we are moving in the right direction and that we have the momentum, but it also shows we need to keep working hard. I am the driver with the most wins and poles at the moment, but we need to have our feet on the ground and keep pushing, because the whole championship is going to be very tight. If you look at the second (Q2) part of qualifying in Barcelona, where it is easiest to see which car is really quickest, then it is clear how close it is between us. The advantage is not so big. But I have to say that, in the race, with our car and set-up and how we manage the tyres, as well as having a great strategy, we had a better package than McLaren. This doesn't mean we have a real advantage, so we need to keep improving the car."