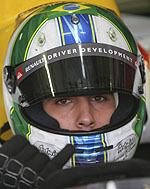 Lucas di Grassi (right) and reigning champions ART Grand Prix may have finished the final day of the first GP2 series test at the top of the timesheets, but the real story at Circuit Paul Ricard was how incredibly close things are shaping up to be for what is already a highly anticipated season.

Today's running saw the top 20 drivers covered by one second. This figure reflects a simply astonishing feat when one considers that the first chance anyone had to run the 2007-spec cars in anger, was just yesterday morning.