Williams on top as Valencia test gets underway 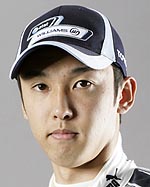 Williams and Spyker were in action at Valencia today, both teams beginning their penultimate pre-season test.

The British team had Kazuki Nakajima (right) and Alex Wurz on duty, the Japanese driver covering 113 laps on his way to posting the best time of the day.

however, the day was not without problems, as Test Team Manager Dickie Stanford reveals: "On our first day here, Alex carried out set-up work on his car while
Kazuki concentrated on long runs in the morning followed by a race distance, complete with pit-stops, in the afternoon.

"We had a couple of small problems early on in the morning session," he admitted, "but the team resolved them quickly. Alex finished running earlier in the day to allow the team to complete some necessary changes on the car in time for tomorrow's session."

Meanwhile, Spyker, which had three drivers on duty, completed 551km to build on the momentum of last week's test in Barcelona and gather more tyre and systems data and continue work on set-up.

The day also provided two of Spyker's new test and development drivers with the opportunity to drive the F8-VII for the first time. Adrian Valles was first to get in the car and completed 42 laps. Adrian commented, "It's fantastic to drive here at home and lots of people, including the regional sports minister David Serra, came to watch. Unfortunately the track was a little wet this morning, but once the surface dried out later, we managed to get a few more runs and also improve our time. The car is easier to drive than last year, much more constant. I really enjoyed it and look forward to getting more mileage."

Dutchman Giedo van der Garde took over the car from Valles after lunch and completed 86 laps. "The Formula 1 car is very different to the Formula 3 car I've driven, you have to be straight on the throttle when you go out of the corner, but l enjoyed it and I think we made some progress in the afternoon and hopefully helped the team. It's good to get to know the team and the engineers and so far it's working pretty well."

Meanwhile, race driver Adrian Sutil completed a shakedown of a second F8-VII chassis in preparation for a full test programme tomorrow and Wednesday.

"It was another productive day of testing and, again, we had exemplary reliability," said Mike Gascoyne. "Today the aim was to do as much mileage as possible for the two test drivers and to continue to work through all our control systems. Both Adrian and Giedo did a good job, both putting in enough miles to qualify for their Superlicences. They also helped the team gather some valuable data on the electrical systems. Unfortunately Adrian's early morning running was limited due to a damp and slippery track, but I think both drivers did a very good job. We also collected more information on the tyres, which will help us refine set-ups later in this test."

Tomorrow, Malaysian Fairuz Fauzy will get his first taste of a Formula 1 car in the morning before handing over to Christijan Albers in the afternoon. Adrian Sutil will continue in the second chassis for the remainder of the test.