Liuzzi confirmed at Toro Rosso but not Speed, yet 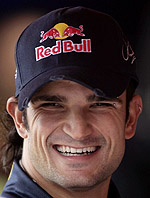 Scuderia Toro Rosso has confirmed that Tonio Liuzzi will continue with the team this season, however Scott Speed has not been confirmed.

Speaking in Barcelona, team boss Gerhard Berger said there were "contractual issues", claiming that a number of matters need to be resolved before the American gets the nod for 2007.

However, when pushed, Berger admitted that he was disappointed by Speed's commitment: "If someone drives for us he has to have the same commitment as the rest of the team. And there were times last season when I didn't feel, in Scott's case, that this was the case."

However, the Austrian admitted that both drivers need to raise their game. "If a driver has a car capable of taking pole and winning, then its driver must take full advantage, not that our car is capable of achieving this at the moment. However, I feel that even if the car was capable our drivers did not show that sort of commitment last season."

Asked when an announcement regarding Speed might be forthcoming, Berger said that he hoped it would be soon, but suggested that the next move needs to come from the American.