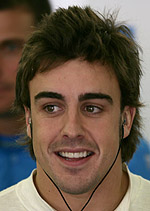 McLaren has confirmed to Pitpass that Fernando Alonso will make his debut for the Woking team today, when he takes part in the final day of testing at Jerez.

The Spaniard's debut with the team has been the subject of much discussion in recent weeks, and the deal that sees him join his new team ahead of schedule has taken place at the highest level, with many employees at both teams kept in the dark, until now.

Still smarting from the secret deal which saw Alonso sign for McLaren over a year ago, Renault seemed intent on keeping the Spaniard to his contract, which means he remains with the French team until December 31.

Last week, McLaren CEO Martin Whitmarsh admitted that he still hoped to see the Spaniard in one of his silvers cars this week, but his dream appeared to be shattered when Flavio Briatore talked to the media earlier this week. The Italian was incensed that McLaren had spoken to the media without first consulting him.

Whatever, a deal has been done, and a McLaren spokeswoman has now officially confirmed to Pitpass that the two-time world Champion will make his first appearance today, though it will be interesting to see how the team(s) deal with conflicts regarding sponsors logos.