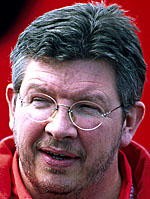 According to our sources, Michael Schumacher and Ross Brawn will make their final appearance in Ferrari overalls this Sunday, when Ferrari hosts its Ferrari World Finals, the event that traditionally brings to a close the company's racing season.

Michael Schumacher announced his retirement at Monza, finally hanging up his helmet after a sensational drive to fourth at Interlagos on Sunday.

There has been speculation at to Brawn's future, with the Maranello outfit scheduled to make an official announcement today (Wednesday).

Some have said that the Englishman will take a one-year Sabbatical, returning to Ferrari in a more senior management role in 2008, while others are divided as to whether Brawn is looking to retire completely or perhaps seek a fresh challenge within motorsport.

Whatever, Ross Brawn will not be on the pit-wall for Ferrari in 2007.