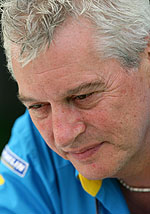 Renault's Engineering Director explains why the pressure won't be getting to the team this weekend in Japan.

Pat, from a technical point of view, who of Renault and Ferrari will have the advantage this weekend?
Pat Symonds: I think we are well prepared. Looking at the data and taking into account the choices we have made for the weekend, I think we will be competitive. The gap between us and Ferrari will be small, but I think we can be ahead.

On the psychological front, what shape is the team in?
PS: Our great strength at Renault is our ability to question ourselves rigorously. After a disappointing race like China, for example, we spent a log time analysing why we did not achieve a better result. We reviewed everything and made a number of discoveries. The result is that we are feeling strong psychologically this weekend: there are no doubts over what happened last week, and we know that th events in Shanghai will have zero impact on our performance this weekend.

How is the battle for the 2006 title, different to last year's?
PS: In 2005, we were fighting a team with a faster car than ours. This year, the balance is almost identical in terms of performance, and the balance swings to one team or another according to the type of circuit, the tyres and their ability to adapt to the conditions. Our approach is completely different, and much more aggressive.

In 2005, you allowed McLaren to trip themselves up by underestimating you. Is that harder with Ferrari?
PS: Those two teams have very different philosophies. But in spite of appearances, I think Ferrari are getting edgy. Some of their recent comments have suggested that our performance is getting to them…

Finally, the media centre in Suzuka is fizzing with comments from Fernando that he had felt 'alone' in China…
PS: I didn't hear the comments myself, and I know from experience that drivers' comments can often be interpreted in a number of ways, or taken out of context. So I can't comment on that. What I can say, though, is that win or lose, we always do so as a team. Nobody is singled out. We know mistakes happen: engineers and mechanics can, and do, make errors, a driver can run off track, a situation can be misunderstood. But blaming this or that individual for any situation is always a mistake. That is the way we have always worked – and will continue to.