Jarno stays with Toyota for 2007 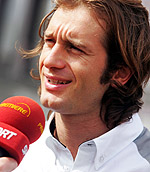 According to reports, Jarno Trulli has agreed terms which will keep him at Toyota in 2007, with options for a further two years.

Although the deal has yet to be officially confirmed by the Japanese team, it would support comments made by Toyota Motorsport boss John Howett to Pitpass last month, when the Englishman admitted that he was hoping to retain his current line-up.

Although, on his day, very quick, and a proven winner, Trulli has yet to score a point for his team this season, while teammate Ralf Schumacher has delivered eight. However, it's understood that Toyota is looking for continuity and feels that many of the problems thus far have not been down to the drivers but aerodynamics, reliability and, initially, the switch to Bridgestone tyres.

With Ralf Schumacher already under contract for 2007 there was speculation that Trulli might be dropped, and consequently a number of drivers have been linked with the Japanese team including David Coulthard, Jacques Villeneuve, Juan Pablo Montoya and even Kimi Raikkonen.