Briatore: Manufacturers should stick with Bernie 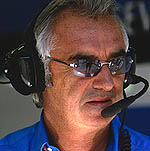 Renault team boss, Flavio Briatore, has urged the manufacturers and manufacturer-backed teams to sign up with Bernie Ecclestone and the new Concorde Agreement rather than risk splitting the sport in two.

Speaking to Auto Motor Und Sport Briatore was clearly giving his personal view, since Renault is committed to the Grand Prix Manufacturers' Association, of which it is a founder member.

"The cards are on the table and everybody is free to decide what they choose," he said. "Those who want to compete with reasonable costs have to stay in Formula One. The rest will have to do something different.

"We should only have one thing in mind," he added. "It took many years to bring Formula One to the level that it is at right now. It would take only one season to destroy it."

The Italian's comments come exactly one week after FIA President Max Mosley suggested that the manufacturers and manufacturer-backed teams should not receive a share of the income from F1.

Referring to the idea of the manufacturers running their own series, Briatore suggests that their self-interest would be detrimental to the sport. He suggests that (currently) Bernie Ecclestone and Mosley are the only people with the experience and vision to run the sport.

"People in this business have a very short memory," said the Italian. "For most of us the world ends at our garage doors. Max and Bernie see the whole picture.

"Mosley has to act as he does, because we can never reach an agreement. It is normal that occasionally this results in not so good decisions. However, all in all he does a very good job.

"Bernie made us all rich," he added. "I do not understand the people, who complain all the time, that they do not get enough money. I know colleagues who started as normal people in this business. Now, they are normal people with a private jet."

Referring to Mosley's proposals for 2008, Briatore made it clear that the Englishman has his full support.

"Max is right with his new rules," he said. "We must cut the cost to guarantee a future to Formula One. For me he could have gone even further with his cost saving measures."

Asked to name such an example, he replied: "A Grand Prix is a two-day event. Friday should be a test day. Then we would not need to test during the season at all. The single tyre supplier and a few additional standard parts on the car will support that.

"I would cut testing before the season to one week. That should be enough to see whether the new cars are running and everything is safe. We burn millions of dollars with testing and nobody watches us. What a waste of money."

And his vision for the future?

"The ideal situation would be to have a budget cap of 100 million dollars for each team. The job of the FIA would then be to police the budgets, just like the tax office is controlling your income and expenses. In such a formula efficiency would win. Who makes the most with a given amount of money."