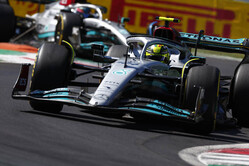 Despite Mercedes late revival in 2022, team boss Toto Wolff fears his team may begin the new season off the pace of the leaders.

According to the German team the issues it was to face for much of the season first appeared at the initial Silverstone shakedown, their worst fears realised at the subsequent pre-season tests.

Though the team made huge improvements over the course of the year it was essentially too little, too late.

Those fans hoping that Lewis Hamilton and George Russell will start 2023 on a better footing will be alarmed at Toto Wolff's claim that the team might initially be out-paced by its rivals.

"We have understood how we fell back, where the shortcomings are, and where we have gaps in understanding," said the Austrian, according to Motorsport.com.

"We're working hard on putting a car on the ground that has addressed all of that," he continued. "But we will only see when we start testing whether we have unlocked the potential that we believe has always been in the car.

"We have no doubt, when you're starting behind by half a second, it's going to be difficult to catch up to such great organisations like Red Bull or Ferrari," he admitted. "Having said that, we are super determined in doing just that, but we need to set our expectations at a realistic level.

"If we perform in the way we hope, then we'd like to be part of the racing at the very front. That would be a starting point. But we don't take that for granted. It could well be that the gaps are like they were at the end of last season.

"I think there's so much potential still that within our car, within the concept, the way we drive the car, etc, that maybe our development slope can be steeper in the months to come."

While Wolff has admitted that the DNA of the car could change, it remains to be seen whether the German team will stick with its controversial zero-sidepod approach, a concept that technical director, Mike Elliott still believes in.

"We were surprised that no one else found this loophole," he told Auto Motor und Sport. "When you've gone down this path, it's very hard to copy anything else.

"We've been trying to understand the issues and get into a position to predict the performance variations from track to track," he added.

Perhaps the reason the concept wasn't copied was because many believed it played a significant role in Mercedes issues, Elliot claims otherwise.

"It has nothing to do with the shape of the sidepods, but more to do with how we designed the car and what our goals were," he admits. "At the beginning of the season we had to deal with aerodynamically generated bouncing like everyone else. That masked the real problems of the car.

"With our upgrade in Barcelona, we got rid of most of the aero bounce. The bouncing that was still there at the end was caused by bumps, it's inherent in these cars that are just above the road.

"At first we couldn't explain why it always looked different from track to track. Later our predictions became more accurate. Our simulations gave us a pretty accurate indication of which track would be good or bad for us.

"We now also have a good theory of what we need to do so that this doesn't happen to us again next season. That gives us confidence. But in Formula 1, unfortunately, you never know everything."