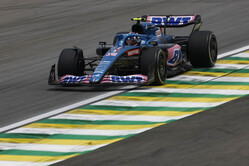 Ahead of today's practice session, the air temperature is 24 degrees C, while the track temperature is 38 degrees. Although bright and sunny there is still plenty of cloud with a 20% chance of rain.

With this being a sprint weekend, which means things get changed around a little, Logan Sargeant is in the Williams for this session replacing Alex Albon, the aim being to assist the American with his super licence points.

With only one practice session yesterday, and qualifying taking place in mixed conditions, the teams have little to go on, especially as they have to divide their focus between today's Sprint and tomorrow's race, both of which have valuable points on offer.

Perez has a five place grid penalty after taking on a new ICE, but that is for tomorrow's grid, not the Sprint.

The lights go green and Vettel leads the way, followed by Stroll, Bottas and Sainz. As more drivers head out, all three compounds are in use.

Among the early risers is Sargeant in the second Williams.

The Briton is on softs while his teammate and Perez are on hards. Sainz, now fifth, is the highest placed medium runner.

After locking-up, Latifi goes off at Turn 13 but is able to continue.

After 12 minutes, only the AlphaTauris have yet to make an appearance, though Stroll and the McLarens haven't posted times as yet.

Ocon goes seventh, ahead of Bottas, Alonso and Verstappen.

Ricciardo is advised that the wind means he's picking up a 15 km/h tailwind into Turn 1.

For his super licence demands, Sargeant needs to complete 100 kms in this session, which is equivalent to 24 laps. He is currently on 12.

On the mediums, Vettel is advised that most drivers are complaining of "rear deg".

Switching to softs, Hamilton goes quickest in S2, going on to post a 15.137 which puts him third.

Bolting on a set of fresh softs, Verstappen improves to third with a 15.098 but is demoted when teammate Perez improves to 14.788.

Hamilton is advised that the wind has picked up over the last couple of laps.

Though he is bottom of the timesheets, Sargeant has completed 28 laps, 4 more than the 24 required.

With 10 minutes remaining, all bar the McLaren pair are on track.

Ricciardo, who had a difficult Friday, isn't finding things any easier today. The Australian uttering an uncustomary expletive over his tyre deg.

Check out our Saturday gallery from Interlagos here.