Domenicali confident F1 will be "protected" from global recession 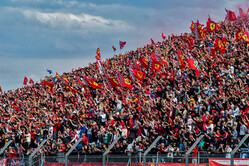 Whatever the true cause of the global recession, which in reality is only just getting started, the fact is that F1 is already being affected, witness the adjustments to the budget cap to reflect the ever rising energy costs and the like.

However, F1 CEO, Stefano Domenicali is confident that almost everything is in place for the sport to ride out the financial storm.

"First of all, being a world championship, we can spread around the world the risk of having this kind of situation to manage," he told financial analysts recently. "On the other hand, the fact that we have long-term agreements will reduce the exposure to this risk.

"What I can say and share with you is that we already see an incredible number of pre-registration with regards to the ticketing of next year," he continued. "So this is a good sign.

"In Europe, where I'm living, it is clear that this recession is taking place. But I think that the way that we are structured, the way that we have done the deals will protect us and will enable us to move forward in this direction.

"Therefore, I would say this kind of situation lets us think that we should be optimistic in this context that, of course, we monitor. But this is what we see today."

While the global pandemic, the subsequent lockdowns and governments' insistence on throwing money at the issue got the ball rolling, Russia's invasion of Ukraine has hardly helped.

For F1 however, the pandemic presented a golden opportunity, for while the sport was one of the only competitions to put anything like a global schedule together for two years, the lockdowns meant that there was a whole new captive audience for Netflix' Drive to Survive, which until the pandemic had barely registered with those who weren't already fans.

As the threat from the pandemic diminished, the sport was able to welcome a whole new army of fans, keen to splash the cash on just about anything the teams wanted to flog them.

However, with the global crisis showing no sign of abating, it is the luxuries that will go out of the window, luxuries like Netflix and limited edition caps and T-Shirts.

Furthermore, as Alex Albon pointed out in Las Vegas last weekend, when he was approached by a 'fan' who declared "you're that Netflix guy!", the novelty will eventually wear off, and many of those converted to the sport, or rather its personalities, will move on. Then, of course, there is the 'King's New Clothes' factor, though the sport is looking to avoid this with a myriad of gimmicks aimed at 'spicing up' the show and thereby continuing to capture these new fans attention,

Nonetheless, as those barely affected by the recession stump upwards of $2,000 for seats for the Las Vegas event, Domenicali insists that the current good times will continue.

"The attendance increase is just magnificent in terms of what Formula 1 is bringing mainly to new audiences," he said. "And that is true that the business model we are having with certain promoters is more related to the fact that there is a fee that they have to pay, there is the high-end Paddock Club that is on our side.

"There's not a challenge, but the big opportunity to move forward is how we can maximise the revenue and monetise the revenue that we can take from the fact that Formula 1 has become more and more attractive.