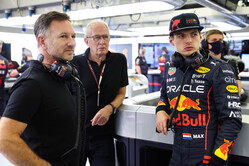 Helmut Marko claims that the 10% reduction in permitted aero testing will put Red Bull at an "enormous disadvantage".

It is the 10% reduction in aero testing that Christian Horner referred to as "Draconian", the Briton claiming that this represents "anywhere between 0.25s and 0.5s of lap time".

Marko agrees, believing that the reduction will put the world champions on the back foot.

"The penalty is tough," he tells Sky Deutschland. "It's just about the limit where we believe we can be competitive in the years to come despite the restrictions in the hours dedicated to wind tunnel.

"It's an enormous competitive disadvantage," he adds. "Our wind tunnel is one of the first to be built. In terms of the turnaround time and the sensitivity to heat, we need even longer before we can find the right temperature as it's not state of the art. We can't miss a shot. What we take into the wind tunnel has to work. We can't afford to make any mistakes."

"Fundamentally it means we are going to have less runs in a simulation tools, primarily the wind tunnel," said Horner. "That means that the funnel of ideas that you can apply to the development of your car is going to be much more restricted.

Horner had used Friday's press conference to describe the Red Bull wind tunnel, which was previously used by Arrows and Jaguar, as a "relic", which will surely come as a surprise to the team's rivals.

"We operate out of a windtunnel that is actually a listed building," he said, "it's a relic of the Cold War. It's not a state-of-the-art windtunnel that our competitors enjoy. It was built in the 1950s and it has its own limitations when it's either too cold or too hot at getting the conditions and the operating temperature at that tunnel to the right temperature. So therefore, a penalty like this is hugely draconian."

Check out our Saturday gallery from Mexico City here.