Verstappen still no fan of the Sprint 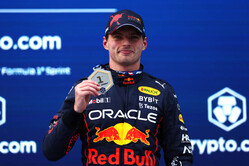 World champion, Max Verstappen says Sprints are about damage limitation for the big guns and are only of any importance to those drivers out of position.

While the Sprint concept continues to divide fans and drivers, the fact is that with six of them planned for next season, it is clear that for the sport's powers that be they are here to stay. Indeed, there is talk of even more in 2024, and even a separate championship.

Nonetheless, in the eyes of Max Verstappen they are an irrelevance.

"Every time I do these races, it's about ‘don't get damage, make sure you stay in the top three'," says the Red Bull driver, according to The Independent. "For me, that's not really a race, because you go into the main race and you know there are way more points available anyway, you just risk a bit more there.

"You do another start, which is exciting," he admits, "but it's only really people who are out of position that move forward because only you put a tyre on that just lasts a whole stint and not much happens."

Of course, other than qualifying, it is the start of a Grand Prix that is widely accepted as being the most exciting part of the weekend, which is why the sport's owners want two of them.

"I don't understand what the problem is for that," insists Verstappen, "because we've had so many exciting races, so you don't need to add one-third of a race distance.

"Everyone is so careful anyway, because if you are fighting for third and you have a little touch and you drop to last, you know your Sunday is going to be tough. So probably you won't risk it, so that's not really a race."

Following Sprints at Imola and the Red Bull Ring, which were both won by Verstappen, this weekend is the third and final Sprint of the season. F1 has yet to identify where 2023's six Sprints will be held.