Gasly on verge of race ban 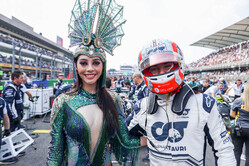 Latest penalty means that Pierre Gasly must keep out of trouble until the seventh race of 2023 season.

Just a week after picking up penalty points at COTA, Pierre Gasly picked up another on Sunday, bringing his total for the 12 month period to 10.

A driver only needs 12 penalty points in a 12-month period in order to get an automatic race ban, and the Frenchman's latest means he must stay out of trouble until 23 May next year, two days after the Emilia Romagna Grand Prix, the seventh round of the season.

Gasly made a pass on Lance Stroll in the early stages of the Mexico City race, however in doing so he locked up and left the track at the exit of the turn, completing the pass off track.

As opposed to handing the position back to the Canadian, Gasly continued, and though he may have wanted to give way, Stroll was now under pressure from Alex Albon and there was every chance that in slowing down the AlphaTauri driver would lose two positions.

Along with a 5s time penalty, Gasly was handed a penalty point, just after being given 2 in the United States Grand Prix and another 2 in Japan, having previously got on the wrong side of the stewards in Spain and Austria.

Should the Frenchman, who moves to Alpine next season, accrue the dreaded number of points and take a ban he would be the first driver to do so since the system was introduced to F1 in 2014.

At COTA, the Frenchman was penalised for falling more than 10 car lengths behind the Safety Car, and then further penalised for failing to properly serve the original penalty.

Handed a 5s time penalty, the stewards deemed that when he stopped, Gasly's front wheels were lifted at 4.54 seconds and rear wheels at 4.8 seconds, however as this was a team error, no driver penalty points were allocated at that time

"I don't feel like I've been that dangerous over the last 12 months," said Gasly, clearly failing to realise what he had just admitted. "It would be a shame to get a race ban for slowing down a bit too much behind the safety car and a couple of track limits infringements this year.

"At the moment you're losing points for these safety-car infringements or track limits," he added, "and obviously the penalty for it is a race ban, which we all agree and also the stewards agree is quite harsh."

Check out our Sunday gallery from Mexico City here.