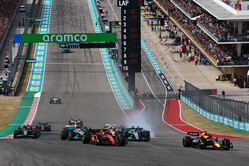 George Russell admits that his "he cut across me" claim following his clash with Carlos Sainz at COTA was a bid to influence the stewards.

As the smoke cleared following the first corner clash which saw the Mercedes T-bone the Spaniard's Ferrari, while Sainz was asking his team "what happened", Russell's response to the incident was to immediately apportion blame. "He cut across me," he declared.

The stewards were in no doubt however, and subsequently handed the Briton a 5s time penalty.

In the aftermath of the race, Russell immediately sought out the Spaniard to apologise, causing some to question why he'd tried to blame the Ferrari driver in the first place.

"When you're in the car, you want to get the best result possible regardless of what may have just happened," he told reporters today. "You're always going to try and defend your case to the best of your ability.

"Obviously, when you get the opportunity to see that incident afterwards, maybe your views are slightly different," he admitted. "My views weren't different. I thought I was at fault for that crash with Carlos but I'm not going to come on the radio during the middle of the race before the FIA have made a decision to say 'I'm so sorry, that was my fault and give me a big penalty'.

"I think that's just the racing driver mentality," he added. "Once the decision has been made, and the penalty has been taken, that's when the apologies came out. I think that's really the same for all of us in that regard."

"It's the kind of incident you expect more to see in the midfield," said Sainz, "when you have so many cars around you. But in the top four, you don't see that incident happen that often and that's why I was so frustrated after the race.

"I obviously accepted George's apologies, because it was good from him to do it, but there was nothing I could have done on track."

Admitting that, in his opinion, the FIA was "a bit easy on him for the consequences that happened", Sainz said: "It always honours the guy that apologises straight away after the race and I always respect that. But that doesn't mean that I'm happy."

Check out our Thursday gallery from Mexico City here.