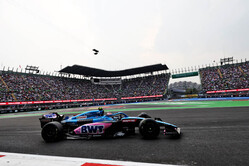 BWT Alpine F1 Team's Jack Doohan made his first on-track appearance at a Grand Prix weekend as he took over driving duties in Free Practice 1 in place of Esteban Ocon in Friday Practice for this weekend's Mexico City Grand Prix.

Jack completed 13 laps on Hard tyres during the one-hour session at the 4.304km Autodromo Hermanos Rodriguez, with his best lap-time a 1min 24.615secs.

The Alpine Academy Driver's session ended short as the team identified a suspected issue on the power unit, which forced his stoppage in the garage as a precaution.

The team replaced the power unit for Free Practice 2 where Esteban resumed his usual duties. On Softs, Esteban finished the session in third place on a 1min 21.177secs. Esteban then joined Fernando in using Pirelli's 2023 prototype test tyres for the remainder of the session.

Esteban Ocon: "It was good to test ourselves on this challenging track, which is quite low on grip but with long fast straights and challenging corners. I didn't run in the first session with Jack driving my car. I've been in his position before, so well done to him on doing his first session. For Free Practice 2, we completed a lot of laps where we were able to learn quite a lot. It was slightly interrupted, but we have plenty of data to go through tonight and I'm looking forward to seeing what we can do across the next two days."

Fernando Alonso: "I'd say it was a solid Practice for us today and it's nice to be back here in Mexico. The track in Mexico City always has varying levels of grip and the unique high altitude puts pressure on both the car and driver. We need to adjust and adapt to these challenging conditions, which we will no doubt face all weekend. Overall, we completed our Friday programme, and we head into tomorrow feeling confident of a strong result."

Jack Doohan: "It was a fantastic experience to drive in Free Practice 1 today, so thanks to Alpine for giving me that opportunity. I put in a lot of preparation for today including working with the engineers at Enstone and at the circuit as well as driving on the simulator. We had more running planned but, unfortunately, we had to stop early due to a small issue on the car. These things happen in motorsport, but to drive 13 laps here on a Grand Prix weekend was an incredible experience and something I'll remember forever. I'm looking forward to furthering my learning experience with the team this weekend where hopefully both Esteban and Fernando can score some points."

Alan Permane, Sporting Director: "Jack did a great job today in his first official Formula 1 session. The track here in Mexico City is not easy to drive, especially on debut, and he certainly gave a good account of himself. Unfortunately, his session ended slightly early with a power unit issue but, during his running, he was very sensible, built up the speed lap by lap and gave us some good feedback. Thereafter, he observed a lot by just watching. Fernando had a smooth day and the car looked reasonable across both sessions. Esteban wasn't able to complete a full programme on race tyres due to the red flag midway through the session and Pirelli prototype tyre testing, but we have enough data to assess in preparation for the rest of the weekend where the aim, as usual, is to have both drivers inside the top ten."

Check out our Friday gallery from Mexico City here.