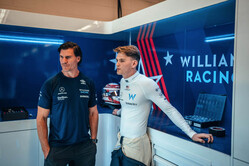 There was no hiding the absolute delight of rookies Alex Palou, Theo Pourchaire, Robert Schwartzman and Logan Sargeant following their FP1 debuts.

Along with Antonio Giovinazzi there were four rookies in action in Friday's opening session, and ironically it was the Italian, who has 40 F1 starts under his belt, who made the mistake and failed to post a competitive time.

"The main goal coming into today was just to learn as much as possible," said Sargeant, who drove Nicholas Latifi's Williams in the session. "I feel like I did pick up on a lot.

"It's very different to what I honestly expected," he added, "but in a good way.

"There's a lot of potential to still pick up on and improve on but I think it was a good start, and I'm happy with how it went."

The American, who is linked with the second seat at Williams, needs to finish in the top five in the F2 championship, and with one race remaining he is currently third.

"I need to have a good Abu Dhabi to secure my superlicence," he said. "That's the main focus at the moment, to go out there and have a good round, solidify myself in the top three in the championship." 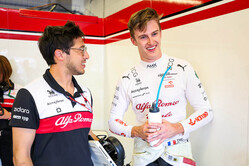 "It was amazing," grinned Theo Pourchaire, who drove Valtteri Bottas' Alfa Romeo. "The best hour of my life. It's an amazing track, I was discovering this track and the car as well.

"Woah!" he roared. "A lot of emotions right now, I'm so, so happy. I'm happy to help the team as well, they did some tests. It's all good, everyone is happy, so it's a good start to the weekend.

"It was a good session, we did quite a lot of laps," he said. "There was a red flag at the beginning so it compromised us, a bit. But all good, good laps.

"I did some mistakes," he admitted, "I tried to push the limits and understand some things. All the settings on the steering wheel, I come from F2, it's a lot different. But it's good experience for the future." 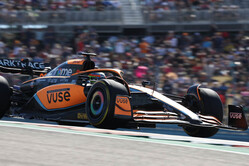 "It's fast, it's insane!" laughed Alex Palou, who was at the wheel of Daniel Ricciardo's McLaren. "Obviously, I was lucky to test before the 2021 car, so that already gave me the feeling of an F1 car.

"But then here, obviously, you have the traffic," he continued, "you don't want to impede anybody else. And you have a car that is not yours. So I was trying to take care of the car, obviously not trying to get in trouble with people that are going to race this weekend.

"This track, I think it's pretty awesome for an F1 car," he grinned, "especially sector one super fast. And it was beautiful to drive.

"The car was capable of so much that I just overshot it in some places, which I think is good," he added. "It's better to overshoot, and then back it off if you only have an hour. And I knew we only had a set of tyres, so I had to do everything in two laps. I couldn't wait a lot, so that's probably why.

"What would I improve? I think just more laps and getting obviously another set of tyres at the end would have helped. But our program today was not to go fast, it was to get data for the team at the beginning, which we did. And then we focused on myself.

"So yeah, I obviously push the engineers to come on, give me another tyres. Like, you're not paying for it, so just give me another one! But obviously, I understand everything behind the decision so I would do the same if I was in their position."

Of particular note to the Spaniard, who won the IndyCar championship last year, was the McLaren's sensitivity.

"This car is more sensitive to the wind than an IndyCar," he said. "It's probably close to what we feel on ovals. A little bit of wind damages the car balance a lot. And it was tricky in Sector 1, which didn't help me obviously on my first day and I didn't want to crash on my only free practice! In an IndyCar obviously you will go a lot slower through there.

"I trusted the car 100 percent," he added, "but the car was capable of doing more than I thought it was, so I started pushing more. It's true that on the slow corners I was quite strong but I think it's easy, obviously, to get more confidence there.

"And then... the last two corners I lacked a little bit, especially the second to last one. But the car could do a lot more than I thought and yeah, it was not confidence. It was that I couldn't believe how fast I could go with the car." 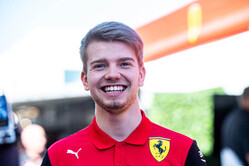 "My first free practice in the F1-75 felt amazing," said Shwartzman. "We completed everything we had planned for the session and the team was satisfied with the work we did.

"The track was challenging, bumpy and windy, which took some getting used to," he admitted. "As a driver you always want to push more and you want to go for the performance, but my goal today was to improve progressively without taking any risks while driving a completely new car. I am happy to have achieved that.

"I'm looking forward to driving again in Abu Dhabi for my second free practice," he added. "I think that with my knowledge of the track there and the experience gained today, I can do even better."

Check out our Saturday gallery from COTA here.