Rules overhaul not worth the effort, says Vettel 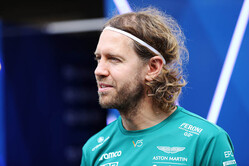 While not wanting to say it has failed, Sebastian Vettel does believe the 2022 rules overhaul was not worth the effort, while Sprints are about making "more money".

Though Ross Brawn and his colleagues at the FIA and F1 Towers may be slapping themselves on the back regarding this year's rules overhaul, the rest of us are not so sure.

Yes, as Ross and Stefano will point out at the drop of a hat, the fan demographic is changing, especially in terms of the young and females, but other than the 'rearrangement' of the top three and the fact that cars can follow more closely little appears to have changed.

Indeed, other than the bouncing which has plagued some teams from the outset, we now have DRS trains which can frustrate the efforts of drivers for much of the afternoon.

Certainly, by no stretch of the imagination could one say that the results of the overhaul have been dramatic, hence the ongoing determination of the sport's powers that be to spice things up no matter how artificial the method.

Despite his increasing resemblance to Scooby Doo's Shaggy, Sebastian Vettel is a purist, and remains unconvinced by the overhaul.

"The big push this year was to make the cars able to overtake and follow a lot closer," he says. "But I don't think there's a big difference.

"We follow closer, but we've got less drag, so you need to be closer to also overtake, and on tyres, the big target was to allow racing more, but I don't think it is a big difference either.

"I don't want to say it has failed," he insists, "but certainly a lot of effort had gone in and not all the effort came out. Let's put it this way."

Referring to the new 18-inch tyres, the four-time world champion, who retires at season end, says: "I think everybody is exploring or finding the same thing, so as long as you're on the good side of things, it’s okay.

"But usually, the faster you are in terms of the car package, the less problems you have. So now being at the back of the grid, we do have some surprises and some weekends where it doesn't go right.

"Then, you only get one or two runs maximum in qualifying, which you know, makes it a lot harder. But I would say it's pretty much as it was."

Ever the purist, Vettel admits that he is no fan of the Sprint.

"I think that from a driving point of view, it's not very exciting to have a sprint," he admits. "I think you are still looking at the main race. You're looking at maybe improving your position, obviously, but mostly not losing. You get some points now, and you get a little bit more, but I think the main focus is still on the race.

"I don't want to be the bad guy for just being the bad guy," he insists, "but I think it is a way to make more money. If there is a race, obviously it's more exciting than maybe a practice session. You have more people watching.

"So I guess it's a question of approach, but then I don't have the full access to the numbers. That's what we were told some while ago."

Which takes us back to those ever changing demographics.