American driver in F1 not a necessity, says Brown 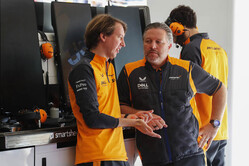 Despite F1's growing success in the US, McLaren boss, Zak Brown doesn't believe it is a necessity for there to be an American driver on the grid.

His comments come in the wake of Colton Herta having his way to F1 being blocked due to him not having the necessary number of points to qualify for a superlicence, a move which led to an outcry from a number of American drivers who argued that the sport doesn't give relevant respect to the likes of IndyCar.

Among those critical of F1 was Alexander Rossi, the last American to race in F1.

However, as the sport's owners, Liberty Media, seek to expand the sport in their backyard, with the US hosting three rounds of next year's championship, F1 CEO, Stefano Domenicali appears adamant that Michael Andretti's dream of having a team on the grid anytime soon will not be realised, and now it appears that American drivers are not wanted either.

Zak Brown doesn't see that as a problem.

One of the reasons Brown feels that F1 doesn't need an American on the grid is because, courtesy of the likes of Drive to Survive, the sport has already captured the imagination of a whole new audience in the US.

"Netflix and the growth of Formula One in America is what put Formula One on their radar," he said.