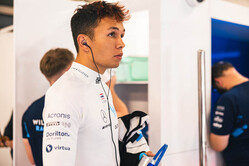 Cleared by the FIA to race this weekend, Alex Albon insists he feels no pain and is ready to get back to work.

The youngster missed the Italian Grand Prix after feeling unwell, despite having taken part in the Friday sessions. Found to be suffering appendicitis, he suffered respiratory problems following the operation.

Admitting that the rest of the Monza weekend is mostly a blur due to being "drugged up", he does remember turning the TV on to watch the race, only to be ordered to switch it off again after his heart rate began to rise, most probably out of frustration at not being able to take part.

Speaking of his recovery process, which began as soon as he returned to his home in Monaco (natch!), he said: "We treated it like a nine to five job, training and recovery. Basically, throwing everything at it and day by day, getting better and better.

"Then, obviously, we got to a point where the recovery was going really well. We sat long and hard to think about it. Shall we do it or not?

"I feel ready," he insisted. "I feel as fit as I can be, no pain. We had a good week of training or two weeks almost to get back to where we are today.

"We're realistic and we know that we're coming to the most difficult race of the year. We do have to be mindful of that. But I feel good. I've been karting and it's felt OK.

"I don't think we truthfully had in mind Singapore on the cards," he conceded. "But just with the way that the speed of recovery, it was definitely a possible thing."

Check out our Thursday gallery from Singapore here.