"It was worth taking the risk," insists Wolff 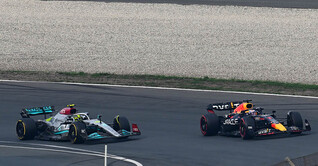 This was it. After those long, long months of frustration, sometimes humiliation, Mercedes was back on top.

For the second time over the course of the afternoon Lewis Hamilton was leading, and what's more, in terms of Max Verstappen, he had a buffer in the form of teammate George Russell.

Verstappen had pitted the previous lap for used softs, but on his 5-lap old mediums Hamilton was confident he could hold off the Dutchman, especially with the support of his teammate.

But as the field was guided through the pitlane as marshals removed Valtteri Bottas' stricken Alfa Romeo from the side of the track, Russell called on his team to fit softs for the final laps of the race.

Still under the safety car Hamilton knew his rear was now exposed and expressed his concern in no uncertain terms, the Briton believing his team had ‘done a Ferrari’ and snatched defeat from the jaws of victory.

At the restart, having enjoyed a tow from the seven-time world champion through the final corner, Verstappen eased ahead on the pit straight to retake the lead.

In time Russell and Leclerc also passed the Mercedes, as Hamilton voiced his anger over the radio.

At race end, as team boss, Toto Wolff advised that the matter would be discussed later, behind closed doors, Hamilton pointedly thanked his mechanics, but not the people on the pit-wall or those calling the shots.

Speaking in the moments after what had appeared to be a return to the top step of the podium for the Briton and his team, Wolff defended the strategy, insisting that putting Russell on the softs was a risk worth taking.

"It is highly emotional for the driver," the Austrian told Sky Sports, "you are that close, racing for the win and then you've been eaten up, so it is clear that every emotion comes out.

"You, as the driver in the cockpit, you are alone and you don't see what is happening," he continued. "We discussed at the moment, are we taking risks for the race win? Yes, we are taking risks.

"He had a tyre that was five laps old - the medium - holding position was the right thing to do.

"At the end it didn't work out for him but I'd rather take the risk to win the race with Lewis rather than finish second and third.

"Lewis was ahead, so you always have a little bit longer with the call. You can do two things, you can either pit Lewis and lose track position against Verstappen and leave George out screwed, or you can pit both... screwed. So it was worth taking the risk.

"If you do that you have both on an old tyre," he explained, "but this would have guaranteed second and third and we wouldn't have raced for the win with Lewis."

Having previously double-stacked the pair, Wolff insists that repeating the move and putting them both on softs would not have worked as they would both have vbeen left behind Verstappen,

"The Red Bull has so much straight-line speed that all on the same tyre out there is no way we are winning," said the Austrian. "I think we can look at the positives and this is what I just discussed with Lewis, there is so much more positive to take.

"Of course second and fourth is annoying," he admitted, "but we felt we had a good race car here. That's what is most important and you've got to take risks where we are."