Sainz hits out at criticism of Ferrari strategy 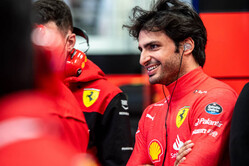 Carlos Sainz has hit out at those who constantly criticise Ferrari's strategy, claiming that there is never positive coverage when the Italian team gets it right.

The Spaniard's comments come in the wake of the latest 'error' from the Maranello outfit, which opted to pit Charles Leclerc whilst running fifth last weekend in a bid to secure the fastest lap.

Unfortunately, the team released him in sixth place behind Fernando Alonso, thereby ending his hopes of securing the extra point for fastest lap, and though the Monegasque was to pass the Spaniard he was subsequently handed a time penalty for speeding in the pitlane, thus dropping him back to sixth.

It was the latest in a number of strategic blunders this year, all of which have been (outwardly) vigorously defended by the team's drivers and its boss.

"It's very difficult to generalise, saying we should have been more brave or more cautious," said Sainz at today's FIA press conference.

"You would need to pick one by one and analyse them independently," he continued. "I'm pretty sure one by one, every result or every conclusion will be different. Maybe we could have been a bit more gutsy here, we could have played a bit more safe here.

"But on the other hand, when there's been two or three, let's say call them bad calls with hindsight, there's been massive criticism about it. I find that a bit tougher in Ferrari.

"I feel like when I was in McLaren or in Toro Rosso or in Renault, when there was a big mistake, no one would come and point it out and criticise you and put you down as much as they do in Ferrari."