Ferrari cites Verstappen tear-off as cause of late speeding penalty 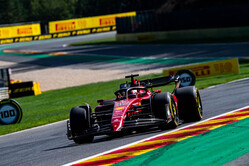 Ferrari believes that an errant visor tear-off caused the sensor failure that led to Charles Leclerc's post-race penalty for speeding in the pitlane which demoted him to sixth.

Following an 'eventful' afternoon, the Italian team's strategy was called into question once again, after a late decision to pit the Monegasque in a bid to secure a point for fastest lap.

Running in fifth, Leclerc was called in to switch him from his mediums to used softs in a bid to claim the precious point.

However, on rejoining the race he found himself behind Alonso in sixth, which meant he was unable to post the fastest lap, and though he was able to repass the Spaniard on the last lap he was subsequently demoted when found to have speeded in the pitlane.

Asked, in the wake of a number of poor strategic calls this season if the team needs to rethink its approach, team boss, Mattia Binotto defended the late call.

"No, I think there is no need at all," he said. "Obviously there is always a need to try to improve, and there are lessons learned, which we are looking at, reflecting.

"I think there is a lot of perception from outside compared what are the truth," he added, "and the reality I think sometimes we're not doing mistakes, where it may have been perceived as mistakes.

"If I look at today, and I focus on today, I think that the call to stopping was the right call," he insisted.

While Binotto admitted that the team was aware it would be a close call, in terms of Alonso, it was confident that Leclerc's fresher rubber would save the day.

However, what the team didn't account for was a tear-off which had lodged in a brake duct at the start of the race and which was the cause of Leclerc's first stop just four laps into the race while under the safety car. It is believed that overheating as a result of the tear-off caused a sensor to fail and it was this failure that ultimately led to Leclerc's speeding in the pitlane at his final stop and the resultant penalty.

"I think it was 0.1km/h in the average speed in the pit lane," explained Binotto. "We were not using our normal sensors measuring the speed because they have failed during the overheating of the front-right due to the tear-off of Max, and our recovery system, maybe it was not such accurate.

"I think overall, it has been an unlucky situation," he added. "It's not because of that we stop deciding and being brave, to go for a fastest lap when conditions are there to go for it."

Whatever the rights and wrongs, Leclerc, who had previously said he wanted to do 'a Vettel' and win every race after the summer break, has now slipped to third in the standings, 98 points adrift of Verstappen.

Check out our Sunday gallery from Spa here.