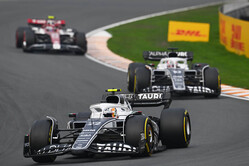 Pierre Gasly: "Finishing P11 is never a great feeling, we tried our best to make it into the points, but I don't think we quite had the pace to make it possible today. Ultimately, we're lacking a little bit of performance compared to the other cars around us, we lost some time in the first stint and struggled on the Mediums in traffic. I think there are still some positives to take away from this weekend though, we knew this was going to be a track we would struggle on but the pace on the Hards this afternoon looked competitive. We're now heading to Monza for the last of the European races, where I hope we'll be able to come back stronger."

Yuki Tsunoda: "It's been a disappointing day, as heading into the race our pace looked quite good and we were hoping to finish in the points. We dropped back a few places at the start of the race but were slowly making our way forward again and were positive we could finish in the top 10. Unfortunately, after I stopped for the Hards, I felt there was an issue with the car, the team could not see anything at that stage so they called me in to change the tyres. However, when I went back out I could still feel there was something wrong, which the team then confirmed by radio and we had to retire the car."

Claudio Balestri (Chief Engineer - Vehicle Performance): "Today the target was to score points and unfortunately, we didn't manage that. We started with both cars on Softs and we knew we needed to carefully manage the tyres. In the fight at the first lap we lost a few positions to Ocon and Stroll, so for most of the first stint we were in P11 with Yuki and P12 with Pierre.

"Pierre ran in traffic for 10 laps and therefore suffered more tyre degradation, meaning he also lost a position to Alonso, so after a few laps we called him in to fit the Mediums. We then did the same with Yuki for his second stint. In this middle part of the race, with both cars on Mediums, we were not able to keep the pace of the two Alpines in front. We could see the Hard compound was very competitive on the other cars around us and for this reason we decide to stop Gasly and fit the Hards, whilst we let Yuki continue on the Mediums for a longer second stint. Having seen that the compound was working well, we decided to also pit Yuki for them.

"After the pit stop he reported something strange at the rear of the car, we called him in again to change the tyres and immediately after we had a car failure. This is currently under investigation within the team. At the end of the race, when the Safety Car was deployed, due to Bottas stopping on track at the end of the main straight, we decided to stay out to unlap Pierre and then we pitted the lap after, fitting Options. When the Safety Car came in, Pierre was in P11, just behind Stroll both on the same tyre but the Aston Martin was very fast in the last corner and we could not get past him to enter into the points. Now we need to switch our thoughts to the preparation for next race in Monza."