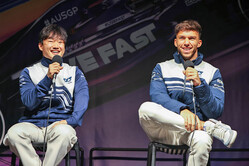 Pierre Gasly: "Scoring points is good for team morale, but I had to work hard for them after a last-minute problem meant I started my 100th Grand Prix from the pitlane, so getting back into the points from there was amazing. There is more performance to get out of our car and of course we will work on that during Friday and hope for clean sessions.

"Apart from Baku last year, Zandvoort was my best weekend, qualifying fourth and finishing fourth in the race, ahead of both Ferraris. It was a super Grand Prix on a track layout that is very complicated, so I was really happy with the result. I like the track, it's difficult to drive and it has plenty of challenges. It's a bit old-school with the banking and it's a place where you cannot make mistakes - not quite like Monaco but in the same style. There are no tarmac run off areas and if you get it wrong, you are straight in the gravel or a wall, while the corners are unusual. The cars are very different this year, but I hope that with everything we learned about the race there last season, we can have another good result, to score more points and head for the end of the triple-header in Monza on a positive note."

Yuki Tsunoda: "It was good to be racing again after the break. It was a bit of an untidy weekend and having to start from the pitlane, but on the positive side, I was generally pleased with how I drove over the three days and we had quite good pace from the car.

"Now we head to the Netherlands, as the middle race in the European triple-header. I've actually visited the track since the last race here, as I did some filming with Max, in another Red Bull challenge. I had lots of fun driving old DAF cars in reverse and it gave me a flavour of what's to come this week with the atmosphere in the Netherlands.

"I had to retire from last year's race at Zandvoort. I did enjoy the weekend up to that point, as I really like the track and the massive banking at Turn 4 for example. It's very enjoyable and fun to drive, so I am interested to see how this year's new cars, which are much stiffer and with their 18-inch tyres will behave here in the banked corners and over the bumps. If we can have a clean time in Zandvoort I think we can aim for points as we now have a better understanding of our car and how to get more out of it."