Leclerc edges out Sainz by 0.004 as Verstappen struggles 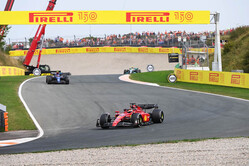 Ahead of today's second practice session the air temperature is 25.9 degrees, while the track temperature is 36.8 degrees. It remains bright and sunny.

Russell headed a Mercedes 1-2 earlier, ahead of Sainz, Norris, Ricciardo and Leclerc, however Verstappen was sidelined early on with a transmission issue, before getting to try the soft rubber.

Unlike a week ago, the updates are few and far between this weekend with only four teams bothering.

The start of the session is delayed due to an incident in the final moments of the preceding F2 session, but this conveniently allows the findings of the Contract Recognition Board to be announced, Oscar Piastri having been given the green light to partner Lando Norris at McLaren.

The lights go green and again Stroll leads the way, and as more driver emerge most are on mediums, though Verstappen is on softs as is Albon. Alonso is on hards.

Hamilton complains that his radio is not working.

Of the first wave, Verstappen goes quickest (13.465), ahead of Sainz, Leclerc, Russell, Norris and Hamilton.

As we await the stewards decision following their investigation into Hamilton and Vettel for impeding in this morning's session, Alonso has to back off after encountering a very slow Russell on the racing line.

Alonso continues on the hards, the only driver to do so.

The only other driver on softs, Albon improves to fourth with a 13.837.

Quickest in all three sectors, Sainz consolidates his top spot with a 12.349, over a second ahead of Leclerc who had just improves to second.

A 13.042 sees Verstappen leapfrog Leclerc to take second, but the world champion remains 0.693s off the pace.

In fact, despite being quickest in S1, the Briton can only manage second with a 12.655, just ahead of (hard shod) Alonso.

Approaching the halfway mark, we have yet to see Gasly - who is probably visiting various motorhomes in the wake of the CRB finding.

An impeding incident involving Perez and Sainz has been noted.

Gasly finally heads out as Leclerc crosses the line at 12.345 to go top.

Leclerc, Sainz, Hamilton and Norris are covered by just 0.103s.

Unfortunately there appear to be an issue with F1 Comms at Biggin Hill and as a result incorrect information is being supplied in terms of tyres.

Which explains that spate of improvements.

Hard to believe after last week's tour de force, but Verstappen appears to be struggling with his car. He is currently 0.697s off the pace.

In the McLaren garage mechanic swarm over Ricciardo's car which is thought to have developed an oil leak.

In quick succession, Vettel and Sainz miss the apex of Turn 12.

Out come the yellows and then the red flag as Tsunoda is off and stuck in the gravel at Turn 10.

The session will resume with 4 minutes remaining.

The lights go green and Verstappen is first out, followed by Sainz, Hamilton, Stroll and Ocon.

Check out our Friday gallery from Zandvoort here.