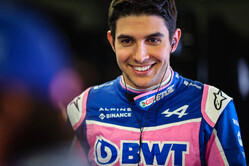 Formula 1 has made the 300km journey from Spa-Francorchamps to the coast of the North Sea ahead of this weekend's Dutch Grand Prix. Team Principal Otmar Szafnauer previews racing at the raucous Zandvoort Circuit.

What are your post-Belgium thoughts?
Otmar Szafnauer: "Belgium was a very good race for the team with sixteen points scored after finishing fifth and seventh. I was very pleased with the collective team effort and displays of teamwork and togetherness throughout the weekend, which is something we can depend on in our championship fight. Both drivers did an exceptional job, arguably amongst the standout performers of anyone on the grid all weekend, and they both showed speed and high level racecraft in their performances. We had the fastest pit-stop of the race - a fantastic achievement by the pit crew - so congratulations to them on that feat. It's an area that has been the subject of very hard work, which we will continue to assess to ensure we add some consistency to those fast times."

How is the team shaping up for the second race of the triple header in the Netherlands?
OS: "Last year, the Dutch Grand Prix was a highlight of the season, as it brought something a little bit different to the calendar. Above all, it's a great race for the fans, who create a fantastic atmosphere and that only makes racing even more enjoyable. It will be interesting to see how the event has improved since last year. The on-track racing was great last season with overtaking possible around the lap. Our target is to be in the mix for points again and aim to have a similar, if not better, result than we did last weekend in Belgium and extend our lead in fourth place in the Constructors' Championship. There's a long way to go in the season but being consistently strong is at the top of our priority list."

Esteban Ocon enters the week in Zandvoort on a high, after a strong recovery drive from sixteenth on the grid to finish seventh at Spa-Francorchamps. The Frenchman will be hoping for a similar points haul this weekend, in what will be his second-ever Dutch Grand Prix in Formula 1.

You must still be quite pleased with how last weekend at Spa unfolded?
Esteban Ocon: "Spa was one of the best weekends we've had as a team. I felt happy with the balance of the car and credit to the team for delivering a car which was flying all weekend. It was a great Qualifying session on Saturday and a smooth race on Sunday, despite the engine penalty, and we collected some solid points with both cars in the top ten. Spa is always a very special place and I am very glad that we will be coming back next year. In the end, we left Belgium very satisfied, but the focus has now fully shifted on the upcoming race and we've got to make sure we carry this momentum heading into our Dutch Grand Prix weekend."

What are your memories of Zandvoort and do you enjoy driving here?
EO: "It's great to come back to such a historical circuit like Zandvoort. Of course, the sport made a comeback to The Netherlands last year and I also raced there in DTM in 2016 so I know the circuit and enjoy driving it for sure. The contrast between Zandvoort and Spa is huge. We go from long and flowing laps to a much shorter and very twisty track. It's a cool circuit, really undulating, fast and flowing which requires a huge amount of focus and commitment. The setting is also pretty spectacular, being right on the beach, and it is also very close to Amsterdam which is always a cool and vibrant city to visit. And the fans really put on a great show, the atmosphere all weekend is electric."

Is there a part of the circuit you're excited to be racing on again?
EO: "The whole track is pretty exciting but maybe the banking at the end of the lap is always a fun one. It doesn't resemble any other corner in Formula 1, so that's pretty cool. It's a narrow track which doesn't make overtaking too easy so our starting grid position will be very important again this weekend. Overall, our target remains the same. Have a smooth weekend and maintain our points run in order to consolidate our fourth position in the championship even further."

Fernando Alonso sets foot on Zandvoort tarmac for the second time in his career. Following a fantastic fifth place at Spa-Francorchamps, the Spaniard reflects on what's ahead, in this, the second of three consecutive races.

It's nine points finishes in a row now. How was Spa from inside the cockpit?
Fernando Alonso: "Spa was a good weekend for us. The team executed a strong weekend and we deserved to score points, my ninth top ten finish in a row now. Our Qualifying position was a little higher than we expected because of the penalties, but we managed to capitalise on this position. After a great start putting us in second position, there was the contact with Lewis [Hamilton] Luckily the car wasn't too damaged and we then resumed our race and it was about tyre management from there. We were gifted fifth position in the end after the penalty to Charles [Leclerc], but we've had plenty of bad luck this year, so we will take this when these opportunities come. It was also good to score more points in our battle for fourth with McLaren."

It's your second time in Zandvoort. Do you like it there?
FA: "Zandvoort is a fun place to visit. We have only been there once before, but it's now obviously much bigger thanks in part to the rise of Max [Verstappen]. The whole atmosphere and buzz from the Dutch fans reminds me a little of the early 2000s when the Spanish fans really fell in love with the sport. The atmosphere is really great and I'm sure we will experience the same thing again this weekend. It's a double header but we are excited to get back in the car especially after the team's performance in Spa also with the fastest pit stop."

Any favourite parts of the circuit?
FA: "I like the banking and think it's quite unique to other circuits in Formula 1. It's a fast and flowing track and very different to Spa. A small mistake can be punished, as the barriers are close to the track. Overtaking is quite difficult but not impossible, so qualifying will be important. We're confident heading there as our car seems to be quite good on a variety of tracks this season."