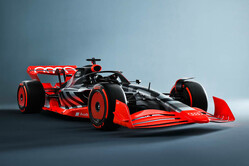 One of the most baffling elements of Audi's entry to F1 is why parent company Volkswagen would want to see two of its brands go head-to-head.

While Porsche has been linked with a return for some time, the situation became more than a little muddled when rumours first began circulating suggesting that Audi was also looking to line up on the grid.

Both prestigious brands are part of the Volkswagen Group and to most it makes no sense that the car giant would want to pit the two against one another.

On Thursday, Audi announced that it will enter F1 in 2026 now that satisfactory engine rules have been agreed. While it gave no indication of which team it will partner with, it has been linked with Sauber. Indeed, amidst speculation that Audi intends buying a 75% stake in the Swiss company, Alfa Romeo subsequently announced that 2023 will be its last season in partnership with it.

As for Porsche, Christian Horner was at pains over the weekend to make clear that a deal is far from being done.

"Obviously, we're pushing ahead with Red Bull Powertrains," he told Motorsport.com. "They fired up the first engine prior to the summer break.

"2026 is still a while away," he continued. "We have plenty of time, and of course, strategically, we will have to do what's right for the team and for the company. And obviously that's between the shareholders.

"There are constructive discussion ongoing discussions obviously with Porsche," he added.

With Honda having suggested it may yet 'return' to F1, asked if Red Bull would be willing to continue with the Japanese manufacturer, Horner replied: "For 2026, nothing is fixed. Obviously, Red Bull Powertrains is established, we have more than 300 people recruited. So, that is our path."

With Audi entering F1 with its own engine, would Porsche really want to return to the grid with what would essentially be a re-badged unit, or is it seeking to produce its own engine also, and if that is the case with both owned by Volkswagen what is the benefit?

"To meet the timetable, the integration work of the electrified side on the powertrain, together with the chassis, it costs time to make it in two cars," explained the German manufacturer's head of technical development, Oliver Hoffmann. "So it's completely different operations, and the integration work, we will do by ourselves."