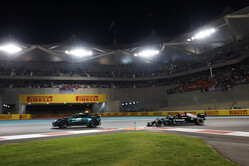 Though insisting that Max Verstappen is a "deserving champion", Toto Wolff admits that a day never passes when he doesn't think about that night in Abu Dhabi.

For a sport that has witnessed more than its fair share of scandals over the years, many of which have taken it from the sports section to the front pages of the mainstream media, Abu Dhabi must surely be among the most, if not the most infamous.

Eight months later fans remain divided, and whilst the reality show theatrics of Drive to Survive might continue to bring new fans to the sport, the after effects have driven away many of the old guard.

It's not about the polarising effect of social media either, many of those fans who lost faith in Formula One after that night were not Mercedes or Lewis Hamilton fans, merely believers in fair play, rules and justice.

With Michael Masi having accepted his fate as official patsy, it is unlikely that we will ever get to know the truth behind the circumstances that led him to make a series of fateful decisions that night, decisions that, no matter what the powers that be might have us believe, have left a dark cloud over the sport.

Having seen a historic eighth title snatched from Lewis Hamilton's hands, Toto Wolff admits that a day never passes when he doesn't think about that night, though he is the first to pay tribute to Max Verstappen.

"I think about it every day," he tells Motorsport.com. "But I have my peace with Max winning the championship, because he's a deserving champion.

"How it panned out, I think I have values around fairness, and especially sporting fairness," he continues. "This is what provides my fundamental love for the sport. And then that was kicked with the feet on that particular day."

Just five days later, Mohammed ben Sulayem was elected FIA president, and at a time most were demanding answers over what had happened at the Yas Marina, the new president was threatening to punish Hamilton for 'boycotting' the official prize giving ceremony.

"At the end of the day, rules are rules," he said, somewhat ironically. "So we are going to look into the side of where the technical rules are there to be employed and was he in breach

Asked to clarify whether Hamilton might face sanctions, Ben Sulayem replied: "Forgiveness is always there, but rules are rules. And I always say, rules are not made, a human made them and they can be improved and changed by humans. So the rules are there to be improved.

"I know Lewis is really sad about what happened," he admitted. "I would say he is broken. But we have to look into if there is any breach."

As it happens no further action was taken against the seven-time champ, while the subsequent official investigation into the events of Abu Dhabi was also eventually given the 'no further action' stamp, other than to blame "human error".

On the night of his election to the presidency, when asked about Abu Dhabi, Ben Sulayem said: "We will look into the rules and make sure any situation like this that occurs in the future we will have an instant solution to it. There are so many areas we can improve."

One of those 'improvements' was the decision to have two individuals share the role of race director, a move that at various times this season appears to have created more problems than it has solved.

Nonetheless, with Michael Masi consigned to 'the outback', Wolff insists that he has faith in the new president.

"I think Mohammed Ben Sulayem, the way he's hiring and recruiting, shows for me direction," says the Mercedes boss. "Every personality has his edges. And I think the primary objective of being transparent, providing good governance and a good framework is what I see happening.

"Are there going to be bumps on the road because Mohammed's organisation needs to fall in place and everybody needs to find their roles? Yeah, for sure. But I'm happy with how's it going. They are open-minded. They're not opinionated. For me, transparent, honest and have integrity."