Alonso is the "surprise of the year", says Marko 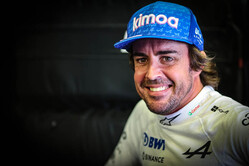 Red Bull's motorsport consultant, Helmut Marko admits that, for him, Fernando Alonso is the "surprise of the year".

Certainly, the Spaniard has given a number of excellent performances this year and appears as hungry as ever. However, as has so often been the case, controversy is never far away.

Last week, just days after insisting that remaining with Alpine was his "priority", the Spaniard announced his move to Aston Martin for 2023, thereby kick-starting the Piastri/Ricciardo saga.

Controversy aside, Helmut Marko insists that the two-time world champion has been one of the true revelations of 2022.

"He's so fast, it's unbelievable what kind of races he delivers," he tells the Osterreich. "For me he's the surprise of the year."

Referring to the Spaniard's decision to join Aston Martin - having seemingly made a career out of changing teams at exactly the wrong time, usually leaving just as they were about to enjoy success - Marko admits: "The only question is whether Aston Martin can provide him with the right package.

"As a driver I even think he can still win races," he adds.

Of course, Alonso is replacing Sebastian Vettel, a protege of Marko's who went on to win four titles with Red Bull.

"Vettel's meticulousness was a perfect match for our DNA,” says the Austrian. “Everything worked together perfectly."

Nonetheless, Marko agrees with the German's decision to retire.

"He has other priorities," he says. "He can't even make it onto the podium with his car, so it's logical that he's drawn the conclusion.

"If you don't put your heart and soul into it you can't go on."