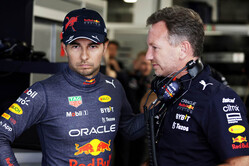 Christian Horner has revealed that it was he who originally suggested that Sergio Perez was on 'holiday mode' in Hungary, admitting it was meant as a joke.

In the aftermath of Saturday's qualifying session, which saw Perez fail to make it into Q3, Red Bull consultant Helmut Marko was clearly unimpressed.

"The summer break hasn't started yet, but he already seems to be in that mode," the Austrian told Sky Sports Germany.

"He is too far behind Max Verstappen at the moment," he added. "He was struggling in all the practice sessions, so we will have to sit down with each other.

"We need to speak to him and he needs to stick to Verstappen's set-ups and be there from first practice. If you're a second slower in first free practice, you don't catch up. We saw that in some races last year as well. We managed to eradicate that then, so we have to make sure we counter that again."

Prior to that, Marko had hit out at the Mexican following an early clash with Russell that resulted in the Red Bull driver's eventual retirement from the Austrian Grand Prix.

"We said before the start 'don't go around the outside in that corner, it is not possible'," Marko told Sky Sport Germany at the time.

Speaking in Hungary, when asked about Marko's constant criticism of Perez, Christian Horner admitted that he was the source of the 'holiday' comment.

"I made a joke to Helmut the other day, I said ‘I think Checo's gone on holiday already', and he went and told all you guys!" he told Sky Sports.

Insisting that he had been joking, Horner went on to praise the Mexican's performance, insisting that but for the late VSC following Valtteri Bottas' retirement Perez could have been on the podium with his teammate.

"Look at Checo's race in the second half, without that VSC, he would've been challenging for the podium in the closing stages of both George and Carlos, he was coming very, very quickly.

"I think a reset over the summer break, just to understand what's not gone quite right for him at the last couple of races is needed, he'll come stronger from Spa onwards."